Looking forward for the GAUDEAMUS in 2014 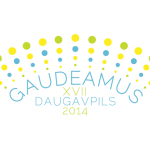 The students’ song and dance celebration GAUDEAMUS having existed for more than a half of century is a significant live cultural event of the three Baltic States, a shared tradition of students’ song celebrations on the Baltic seacoast. The first GAUDEAMUS was held in 1956 in Tartu, Estonia, then followed by festivals organized in turn in Estonia, Latvia and Lithuania. Since 1999 FORTIUS is taking part in all of them. 17th The Baltic Student Song and Dance Festival GAUDEAMUS is going to be hosted 26-29 June, 2014 by Daugavpils, Latvia. Facebook profile